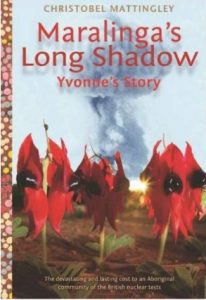 Yvonne’s Story – review or purchase this book from Amazon.co.uk here…

Maralinga’s Long Shadow is an incredible book, an amazing and daunting story. Written by Christobel Mattingley and published by Allen and Unwin, Australia.

In the vast outback of South Australia lived Yvonne, she was part of the Anangu people who had lived on that land for generation after generation.

‘They passed on this precious knowledge , sleeping under the stars through all cycles of the seasons.’

They knew this land and needed no maps, shops or anything other than that which the land would provide. And they were happy.

‘Then the walypala, (whitefellas) came, who did not know the land and they called it desert.

They brought sheep and other animals and started to build a railway.

They brought the need for other things that this land could not provide and they were greedy’.

In 1950, the United Aborigines Mission, had many women who now wore clothes and learnt the walypala’s ways. But one day they took one of their women away from the missions as she was to give birth to her new baby.

Yvonne was born, slightly paler skin than normal, but then her father was a walypala.

She went on to live through enormous change, tragedy and family sadness, with courage and, hope, giving strength to her people, leading them and giving grace.

In 1953, town atomic bombs were exploded at Emu Field, 320 kilometres from Maralinga. In 1956, when Yvonne was 6 years old, they exploded the first bomb of 15,000 tons, part of Operation Buffalo at Maralinga, followed by three further bombs.

And there was still more testing of atomic bombs.

But, strangely, life continued at the camps at Maralinga. The Anangu people were involved in working in the area, usually barefoot with no protective clothing for many years. The effect of this work directly on radio-active lands, and in the breathing of toxic air, meant that there were many deaths, many birth defects in babies and unbelievable suffering.

The book is a story of Yvonne, her life, her family and her ability to challenge and receive some support for her family and her peoples. It is a remarkable story and an insight into the life of an Australian indigenous people in the 1950’s.

The book is beautifully presented in a glossy finish. It is packed with wonderful photographs and artwork by Yvonne Edwards, of the families and the land of Maralinga.

It is a book to keep and treasure, and you can purchase on line too. We recommend for ages 10 and above, and it’s definitely a book for adults too. 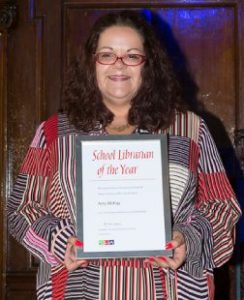