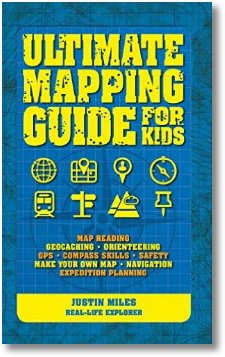 View or buy this book on Amazon.co.uk

Who needs Google Maps when you can read and learn from the Ultimate Mapping Guide for Kids?

Justin Miles is the author of this extremely inviting mapping guide, published by QED Publishing released on May 20th 2016.

Being so new you may not see it in the bookshops yet, but I can be absolutely certain that when you buy on-line, this book will be used straight away.

It is packed with information from, creating your own map of your room, to a world wide guide on orienteering and navigation. There is a section on using the stars and another on using GPS to find your way.

Try out the new outdoor game of Geocaching ,you can make your own game in the garden, park or nearby outside space.

With its fast pace,clear instructions and nuggets of information, this authoritative guide will appeal to all. Written by Justin Miles, one of the few full time explorers in the world, this book won’t just whet your appetite for adventure; it will give you the confidence and the tools to set off on one too.

Justin Miles is a British professional adventurer and has explored The Arctic, climbed mountains, explored deserts and hacked his way through the jungle. He uses his work is support charities and fuel education projects. He is the founder of Just for a Challenge and supports the global education programme Educate a Child.

Books Go Walkabout works in a similar way and supports children across the globe, we recommend Justin’s work and especially the Ultimate Mapping Guide for Kids. In fact I am about to set out to the untamed North Norfolk coast this afternoon, armed with this book and a flask of coffee!

The story had me hooked from the beginning, it’s an amazing story of freedom from slavery set in Alabama in May 1850. 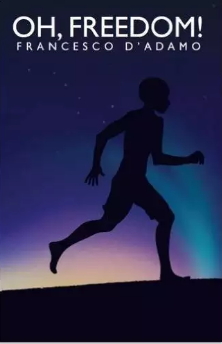 See this book, buy from Amazon.co.uk

Due for release in June 2016 by Darf Publishers, written by Francesco D’Adamo and translated by Sian Williams.

Captain Archer and his intimidating guards with their fierce dogs, protect the land and prevent the slaves from leaving. Tommy is part of a family of slaves and meets Peg Leg Joe, who turned out not to be the devil but a spirit in disguise, who was to lead Tommy and his family away from slavery and into the promised land of freedom, Canada.

Tommy had to admit that was reasonable.

Now the boy could see the man properly, and stared at the wooden leg sticking out of his right trouser leg. So it was not a cloven hoof. P.3

They travel along the legendary Underground Railroad, which stretched for miles across the country’s vastness,the network famously facilitated more than 100,000 slaves to a new life. For Tommy the journey is far from easy and he takes on responsibilities ahead of his years. He later becomes a guide along the routes, moving silently and bringing many people to freedom .

Tommy also learns to read and at one stage discovers a poster advertising a ‘Sale of Slaves’. Knowing that he could read he discovers a truth…

‘His heart beat very fast. He was unlocking a secret, and would find something that the others, his father,mother,sisters could never know. But he would! Confusedly,he understood that doing this made him strong. p.103′.

A powerful book and has lots of links with the current refugee movements.

This is a young adult book and recommended for age 10 years and beyond.