Book Monitor - books from across the world

Wild in the Streets- 20 Poems of City Animals 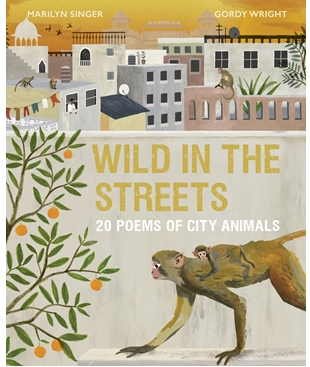 This is a captivating book full of poems about different animals living in cities across the world. A book of adaptation; bats, boars, coyotes, huntsman spiders, honeybees and reticulated pythons. Poems which reflect the nature of the animal and its new habitat and at the back is a glossary with  different types of poems like cinquains to sonnets, and acrostics to reversos.

‘It may be hard to believe that wildlife can survive among the densely packed houses, huge skyscrapers, tarmac, pavements and sewers. Some animals were there before humans encroached on their territory and others have been introduced on purpose, like the Honeybees in Vancouver.’ Marilyn Singer

Reticulated pythons were in Singapore before the city existed and survive in the sewers and waterway, living on rats, cats and birds. Monarch butterflies have long migrations but at the end of the summer gather in Pacific Grove,California before travelling north again in the Spring.

Marilyn Singer is the author and Gordy Wright is the illustrator and they have combined their talents to produce this beautiful book published by Words and Pictures.

An exciting and inspiring way to think about animals in our cities.

The Story of Inventions by Catherine Barr & Steve Williams, illustrated by Amy Husband